According to the Nevada State Police, an SUV struck a firetruck after running a red light on Monday, August 15th.

A CCFD fire engine was on an active call near Warm Springs Road and Paradise. While traveling through a green light, according to Nevada State Police and the Clark County Fire Department, a gray Toyota SUV traveling eastbound ran the red light, colliding with the CCFD fire truck.

Two occupants of the SUV were transported to a local hospital with minor injuries and CCFD also reported minor injuries sustained by firefighters. Officers do not suspect that impairment played a role in this incident.

The intersection of Warm Springs and Paradise remained closed in all directions for several hours and caused major delays in the area. NSP alerted the public of the incident via Twitter and provided several images of the incident. 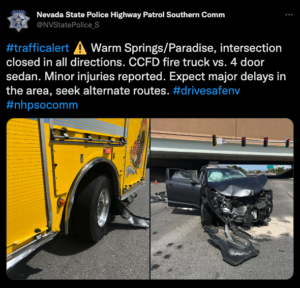