Las Vegas befuddles motorists and pedestrians alike. The roadways present a gauntlet of hazards and distractions that pales in comparison to any other city in the nation! Auto accidents involving drivers and pedestrians occur with astounding frequency.

The world gathers here for conventions, entertainment, gambling, and good times. This creates the most diversified mass of drivers and pedestrian the world has ever seen. They are used to signs in different languages, sizes, and colors; and some even drive on the opposite sides of roadways. They’re moving in all directions across the valley floor. And with 43,000,000 visitors per year coming in from out of town, they’re often bordering on the edge of dazed and confused.

Driving in Las Vegas is Unique

This community boasts one of the highest concentrations of Uber and Lyft drivers relative to the total population. These drivers often rivet their eyes on navigation tools instead of driving duties.

In your face advertising featuring the world’s most advanced and spectacular outdoor signage to street level walking video, billboards create driver and pedestrian distractions unlike anything anywhere.

Strange regulations in real estate development create “saw-toothed” roads. Cactus Drive on the south side of town is a typical example. It runs east-west, and even though it’s mostly straight, the road hurls drivers through a shifting number of lane changes from two-lanes up to six-lanes and then down again with no warning signs or other notice to drivers. Traffic flow goes from break-jamming narrowing to frustrated drivers accelerating when lanes widen out again. People drive like they’re on the Autobahn.

The aptly named Spaghetti Bowl interchange near central downtown Las Vegas where I-15 and US-95/I-515 meet is a constant challenge for drivers. The area becomes highly congested for seemingly unknown reasons any time of the day or night. Heavy truck traffic meets rightfully confused out-of-town drivers in a maze of twisting and turning roads. It all combines for counter-intuitive exit ramps and unclear signage. Good luck to all who enter here! 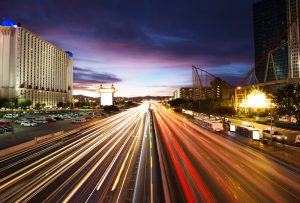 Las Vegas roads are templated on a one-mile grid system with traffic lights at each intersection. As a result, this tends to cause major backups during peak drive times.

As if that weren’t enough, Vegas drivers combat flying rocks, pebbles, and screen from the roadways and rocky shoulders or as they drop off construction vehicles and gravel haulers.

At the same time, a massive parade of vehicles flows in and out on I-15. This main corridor comes in from Los Angeles to the south and from Salt Lake City to the north. This creates significant increases in traffic for both directions. Blame a combination of commercial and residential development in the immediate area and the ever-growing population in towns to the north like Mesquite, Nevada; and St. George and Cedar City, Utah. Not to mention the population boom northward in Salt Lake City.

The 215 Beltway has been a thorn in the side of drivers for years. Though planned and platted well in advance, construction has been overrun by rapid areas of growth and traffic. Since it’s completion, it has undergone a series of constant expansion such as the mess today on its southern end from Decatur to Tropicana on the Ikea curve.

Thought the Desert Inn bypass makes a valiant attempt to provide access, Las Vegas has no central, uninterrupted, thoroughfare to get across town east and west.

As “Destination Party Town USA” Las Vegas has a high consumption of alcohol and legalized marijuana. Motorists and pedestrians encounter impaired drivers at any and all hours of the day if they themselves are not under an influence.

It’s no wonder driving in Las Vegas is the ultimate challenge! The city of 2 and a half million is a catchall of unique lifestyles that gets deluged by 43 million domestic and foreign visitors flooding in every year. It’s the most distracting environment mankind can invent. It’s then exacerbated because the existing surface streets and major arteries are constantly torn up. Combine that with local drivers who spend more time with their eyes on their cell phones, and it’s a recipe for disaster!